Innovative manufacturer of timber dryer and bulk material dryer since 1965

Lauber L-ENZ control - intelligent heat and drying mangement in one

Every L-ENZ dryer come with the touch panel control system.

In combination with the high-quality frequency converters for fan and circulation pump,  it forms the basis for fully automatic operation with the lowest possible electricity costs at the same time.

The handling of the control system takes place with a touch panel display, which also support remote access e.g. from an on-site available computer.

A visualisation of the installed and controlled technology and operating data of the drying plant allows an easy understanding. Fan, circulation pump, control valve / mixing valve are controlled independently of each other. Features such as

are included as standard. 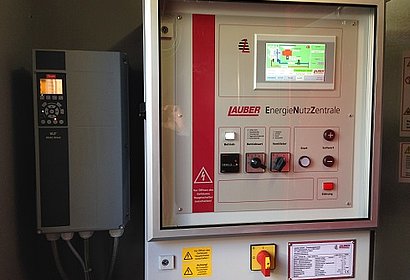 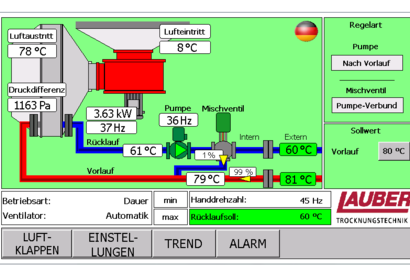 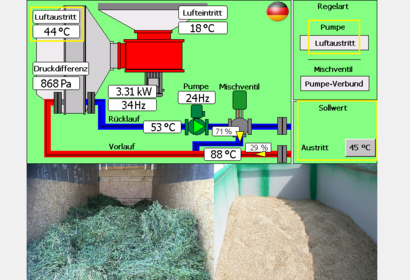 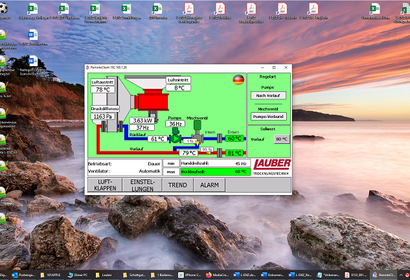 A control according to air outlet temperature allows a gentle drying of temperature-sensitive bulk materials such as seeds or herbs.

The control allows a scaling of the water and air quantity as well as adaptation of the control behaviour in accordance to the on-site heat network.

Thanks to the control, other (rather important) heat consumers are prioritized automatically.

The following features - among others - are included as standard:

The control of the L-ENZ can be extended with ModBus TCP support, so that operating data can be transmitted or even remote water temperatures can be received.

Additional control features and possibilites for the water side

If the amount of heat varies greatly over the year, it may be necessary to greatly reduce the supply of hot water to the drying plant. At the same time, a large amount of water must be circulated in the heat exchanger of the drying plant to ensure frost-proof operation. The installation and fully automatic control of a 3-way mixing valve (in addition to the circulation pump) forms the hydraulic solution. Even for the integration of the drying plant into a given supply line with pre-aligned circulation pump, company LAUBER offers appropriate solutions for this.

By the correct positioning of external temperature sensors in the heating network, the control of the L-ENZ can also respond to the fluctuating return temperatures of primary consumers and thus compensate possible peak situations on the supply side as well as on the return side.

Customers with high-temperature heating networks with over 120°C can use heat with the L-ENZ bulk solids drying by means of a suitable system separation and primary-sided water quantity regulation offered by company LAUBER. Wood chips or firewood will be dried safely and quickly with up to 120°C air temperature.

A buffer storage requires monitoring. On the one hand, a desired buffer level must be ensured, on the other hand, a mixing of the buffer storage caused by too high water return temperatures is to be avoided. Both can be achieved fully automatically with the L-ENZ control. 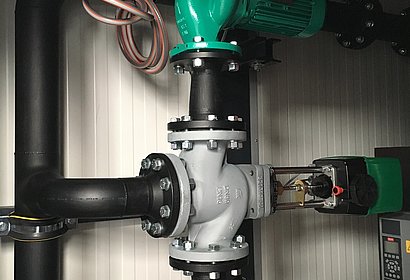 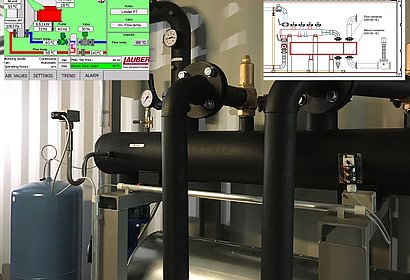 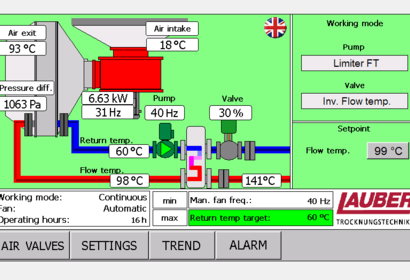 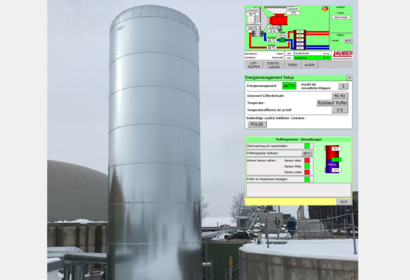 Additional control features and possibilites for the air side

The control allows the control of air flaps by means of servomotors. They can be controlled according to various criteria, e.g. 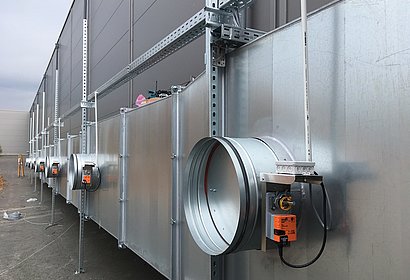 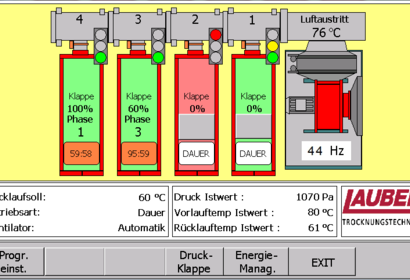 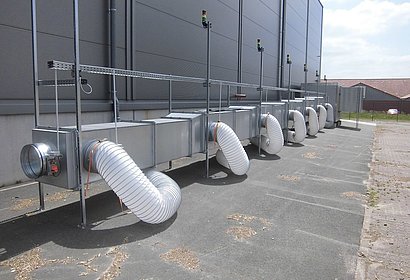 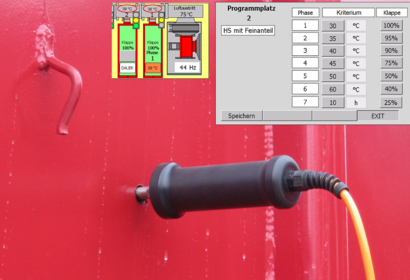 With the heat exchanger bypass, a part of the generated air volume can be passed by the heat exchanger. Airtight shutters are installed for hot air and fresh air and automatically controlled according to the  desired criteria, e.g. water return temperature or air outlet temperature.

Thanks to additionally installed "fresh" air flaps, fresh air (for example, for the cooling of grain after drying) and warm air can be provided at the same time, without the need for an additional fan.

Furthermore, in times of little available amount of heat, a high air volume with high pressure for the simultaneous ventilation of multiple containers / drying bays can be provided - without reducing the water return temperature too far.

This feature is also useful for biogas plants whose amount of available heat surplus highly differs between summer and winter time. A correspondingly large sized dryer, which is capable for utilising high amounts of heat during warm summer time can also be operated constantly with very little heat during winter time.

In addition, the risk of frost is reduced even further due to permanently higher water temperatures in the heat exchanger. 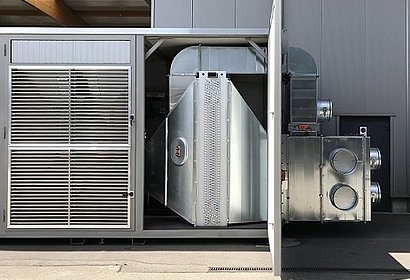 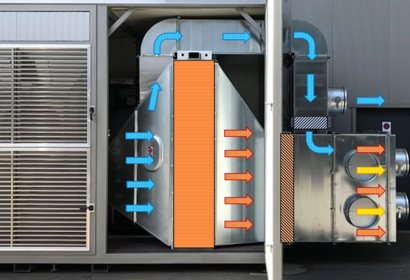 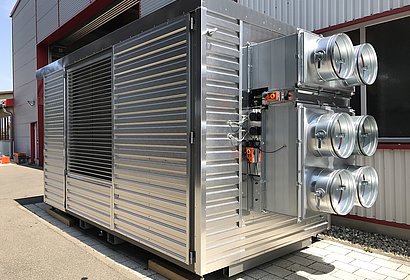 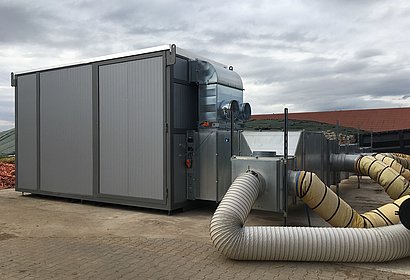 In conjunction with the heat exchanger bypass for the L-ENZ dryer, the air duct can be build as dual air duct (air duct for hot air + air duct for fresh air), which allows maximum flexibility. All containers and drying bays can be ventilated individually with warm air (e.g. for drying wood chips), fresh air (e.g. for cooling grain at the same time) and mixed air.

A control of the heat exchanger bypass is then also possible in dependence to the number of opened electric air flaps in the air duct. 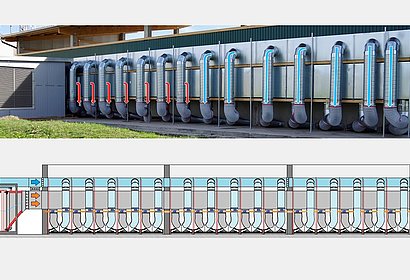 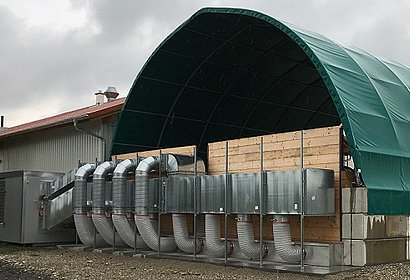 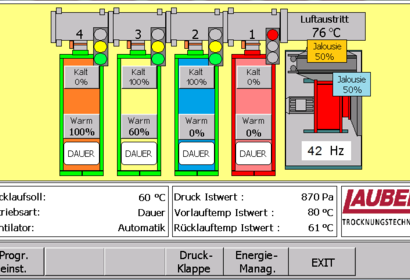 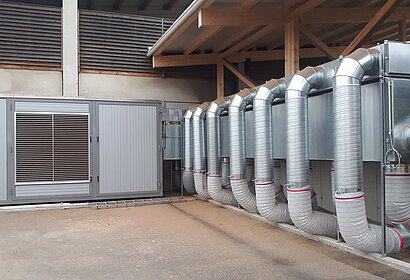 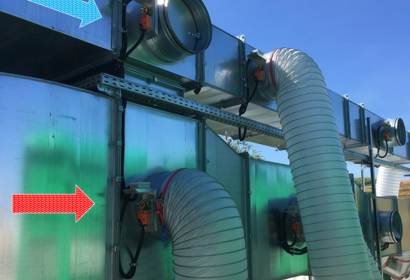 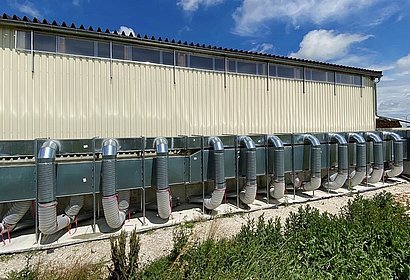